Prior to his studies in Cambridge, Tanner Andrulis grew up in Willowbrook, Illinois, which he first left in order to receive his bachelor’s degree in computer engineering from Purdue University. During his studies at Purdue, Andrulis gained research experience within various areas, including mathematics, artificial intelligence, and scientific simulation. Paired with his interest in creating impactful innovations, Andrulis decided to pursue his PhD at MIT CSAIL.

Andrulis is currently a Graduate Research Assistant at MIT, where he is co-advised by Professor Vivienne Sze and Professor Joel Emer in the Energy-Efficient Multimedia Systems Group.

“I’m really fortunate that I have not one, but two fantastic advisors,” said Andrulis. “Both have been really excellent at guiding me towards following really good pathways, shaping me into a better and more productive researcher.”

When Andrulis first began his studies at CSAIL, he was not sure which specific research pathways he wanted to pursue. He shared that both of his advisors never discouraged any route that he initially thought of and both provided gentle guidance by sharing their expertise with him. Additionally, Andrulis thanks his advisors for greatly helping him improve upon various abilities, including his communication and presentations skills.

Currently, most of the research that Andrulis conducts revolves around investigating the modeling and designing of accelerators for machine learning applications, mainly focusing his work on novel analog and processing-in-memory systems. “Most computers run digital, where everything is stored in 1s and 0s, but analog computers can store things in numbers between 1 and 0, such as ½ and ⅓,” Andrulis explains. “With analog computers, we are able to fit a lot more data into the same space. This allows analog computers to accomplish many tasks with less energy than their digital counterparts.”

By taking advantage of these analog computers, Andrulis says that there is potential to create systems that can run the AI and neural networks that are changing the world right now.

“Everyone loves working with faster computers and things that are able to do more, so being able to put together a computer that can run the AI of tomorrow is a pretty good goal to have.” Andrulis said. “Maybe we can fit an AI into your phone that can run much better without running your battery out or maybe if we run a giant data center, we can do that and consume much less power, reducing the carbon footprint of that data center.”

When looking at the problem he works to solve, Andrulis finds it very interesting because it touches on every level of computing, spanning from the tiny circuit elements that the computers are built on to the big AI systems that people are putting together to run on them.

As a first year PhD student, Andrulis has not yet decided what he wishes to pursue following his time at CSAIL. “I know that I will be conducting research somewhere,” Andrulis said because he feels that making more efficient systems can affect the world everywhere and he would like to be a part of the solution. 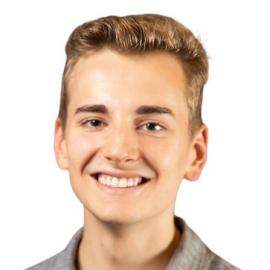