Shashank Srikant always wanted to be exposed to research going as far back to his time as an undergraduate in India. The few research experiences he had were not satisfying and most serious opportunities required one to be in a graduate program. Following his studies at the National Institute of Technology, Kurukshetra, Shashank explored an opportunity with a research team in a young startup, Aspiring Minds. He wore multiple hats working for the startup, which included doing original research, overseeing its integration into products used by millions of people, publishing papers and patents on the startup’s work, liaising with academia, coordinating with various business and sales teams, and hiring and expanding their team.

After a few years with the startup, he wanted to put his skills to good use, but felt frustrated there were so few “knowledge producers” in a country as big as India. Shashank put together a list of entrepreneurs who were innovating at the last-mile and spent a year looking into how they accomplished their work. He said he learned a tremendous amount about how things work at the last-mile, and the reality and pragmatics of using technology for their benefit. The last-mile covers underserved sections of India, consisting of 60 to 70 percent of the Indian demographic and typically in a rural setting, according to Shashank.

After initial hesitance to return to academia full-time following his year-long stint in the last-mile, Shashank applied and was accepted to CSAIL, working with Dr. Una-May O’Reilly and the ALFA Group.

Through his research at CSAIL, he intends to understand reading and writing computer programs, and said he’s interested in how machine learning and data-driven models can help improve the ways in which we automatically reason about programs today. He said there’s an excess of data available which shows how people write and store code. This has led to opportunities to supplement traditional ways of analyzing programs for properties the group is interested in.

“These two approaches to understanding programs - through cognitive science and machine learning, should enable me to design better tools to ensure programmers are productive,” Shashank said. “If we understand how we read and understand programs, maybe we can inform our data-driven models to behave similarly. And with that, aid our current tools which support programmers.”

Shashank also intends to understand why we introduce errors in programs. He said finding and fixing bugs in programs is one of the most expensive activities which the software engineering community deals with today.

“I've always been curious about how we understand things, and how our brains work,” Shashank said. “Added to that, my job at the young company I joined right after undergrad involved innovating in data-driven ways to understand how to write and evaluate computer programs. This interest has stuck on, and our lack of knowledge on the ‘how’ and ‘why’ of programming - an activity we all use every day, keeps me curious and wanting to look for answers.”

Shashank said working with O’Reilly has been a fantastic experience.

“Una-May is genuinely curious about science and how the world works,” he said. “Our research interests also greatly match; she's long been interested in understanding and manipulating computer programs from a data-driven perspective, and she's been involved in robotics - an area from where she derives her interests in neuroscience and cognitive science. She has been immensely supportive of this specific research direction I've wanted to explore which lies at the intersection of machine learning, program analysis, and cognitive neuroscience. That's been very rewarding for me intellectually.”

Shashank is still passionate about being a knowledge creator. Following his time at CSAIL, he said he wants go back to India and get involved at a grass-roots level.

“The economics of generating employment in a small community back home is tremendous, and we are in desperate need of people who can generate employment,” he said. “Further, I think we also need examples back home who can motivate the next generation to aspire to work with a penchant for high quality work. I believe my training here at MIT has given me a taste for that world-class quality, and I'm keen on going back and setting such a bar back home.”

He sees himself building a commercial enterprise in software analysis tools back home, which would draw on his current training. Additionally, he said he’s also equally interested in joining local politics in India to show what a group of motivated, well-trained people can do to the local political system. 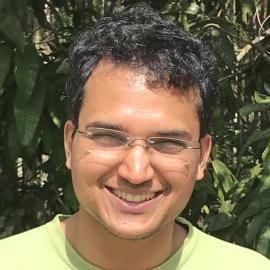