In 2016, Jamal Toutouh defended his PhD thesis at the University of Malaga where he carried out most of his studies and research, which focused on evolutionary computing and its application to smart cities. He decided to leave the wonderful Costa del Sol (Sun Coast) in the South of Spain to take a step forward in his career. The best destination for making this turn was at CSAIL and he won a  Marie Sklodowska-Curie fellowship to make it possible.

Presently, Toutouh is a postdoctoral fellow at CSAIL working with Professor Una-May O’Reilly in the ALFA Group. From the beginning, Toutouh felt the ALFA Group made a great fit for his research. His interest in this group stemmed from various projects, including important research on genetic programming and the application of these methods to real-world problems, as well as the group’s contributions to deep learning by proposing new methods inspired by nature. Toutouh found particular interest in the latter.

Thus, Jamal is building bridges between evolutionary computing and deep learning. Specifically, he is working on the application of distributed co-evolutionary algorithms to train Generative Adversarial Networks (GANs) in a project named Lipizzaner.

“When I arrived at CSAIL, I barely had knowledge about GANs, but the idea of being able to generate new synthetic data by using generative models hooked me up,” Toutouh said. “The number of industrial and academic applications are unlimited.”

“Our main idea is to deal with this type of training by defining an evolutionary arms race between populations (species) of these two types of networks, as we can observe in nature when two species coexist in a predator-prey relationship,” he said. “During the evolution, natural selection continuously escalates the defenses and counterdefenses of the species. Thus, applying natural selection and other mechanisms during the training process the networks become stronger and stronger until an equilibrium is achieved. In general, this equilibrium indicates that the generators are able to fool the discriminators.”

His experience at CSAIL is more satisfying than he expected. He said he feels this is a unique opportunity.

“CSAIL offers me the possibility of taking part in very interesting meetings, presentations, and workshops,” he said. “This huge laboratory is formed by outstanding researchers who are always willing to help and collaborate with you. It is amazing being part of this magnificent ecosystem.”

“Una-May is a really motivating person,” he said. “She always finds a way to guide me in my research. I feel she really cares about me, my personal well-being and my career. I like very much how she leads the group. I am learning a lot about what kind of leader I would like to be in the future.”

Regarding his future, Toutouh is not sure about his next steps. He said he is willing to find a way to keep researching on the conjunction of evolutionary computing and deep learning. He is interested in applying these new methods to address problems of social interest. For example, they have just finished a study in which they have proposed classifiers to ease COVID-19 diagnosis by using x-ray chest images. These classifiers have been trained through GANs by using synthetic x-ray images. Additionally, he would like to work on applying machine learning to address climate change-related problems. One of his last research projects has been the use of machine learning to evaluate the impact of road mobility on air quality. 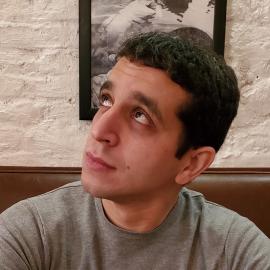