As a researcher with many areas of interest and a soft spot for entrepreneurship, Adam Yaari was always passionate about integrating different disciplines of science and trying to realize state-of-the-art research into practice.

Prior to CSAIL, Yaari completed his double major BSc in computer-science and neuroscience at the Bar-Ilan University and his MSc in computer-science and math at the Weizmann Institute in Israel. Yaari was initially drawn to MIT and CSAIL’s range of esteemed researchers, their established connections with the industry and the ability to combine these two into tangible life-changing inventions.

Dr. Boris Katz and Professor Bonnie Berger co-supervise Yaari. Yaari’s initial research aimed to understand how language is encoded in the human brain and to derive applications within computational Natural Language Processing (NLP). After Yaari was exposed to computational biology, he found that NLP approaches could also be highly useful to the field of genomics.

“From dividing my time between two excellent research groups and supervisors I get to fully understand MIT’s known motto: ‘Getting an Education from MIT is like taking a drink from a Fire Hose,’ where every day feels like a full undergrad-week worth of information,” Yaari said.

Yaari said in Katz’s lab he is exposed to the latest approaches in NLP, computer vision and computational neuroscience. He said he also gets to work on unique datasets, write grants, and collaborate with an amazing network of world-renowned researchers. Meanwhile in the Berger lab, Yaari said he gets to integrate his machine learning knowledge to vital biological problems, boost his statistical foundations, and he’s even learning how to write his own patent.

“In the genomics domain, my main focus at the moment is developing methods for detection of tumor driver events, mutations that are the underlying causes of cancer,” Yaari said.

“While there are specific mutations that are known to drive different types of cancer, the natural distribution of mutations and the lack of functional knowledge make it infeasible to detect driver events in almost 96% of the genome. The approach my collaborators and I have developed offers a potential solution to this problem, which could increase our knowledge of cancer drivers exponentially. Therefore, allowing a deeper understanding of cancer mechanisms, better interpretation of functional regions across the genome and perhaps even early detection of cancer before symptoms arise.”

Meanwhile in the language domain, Yaari said his research looks to better understand how language is encoded in the brain.

“Namely, ‘How do we process linear input into complex structures?’ How do we represent knowledge?’ and ‘What regions are involved in this process?’ Advancements on these questions could help us build brain-like NLP models that learn in a humanly plausible manner. So that perhaps in the future, they won’t require super-computers and hundreds of billions of samples to learn what we do with a 3-pound brain and only a few million words at childhood,” Yaari said.

Yaari said he is deeply passionate about driving a positive impact to society through science innovations and taking theoretical ideas down to practice. In his work, he tries to think where he wants current technologies to be in a decade and make the painful early stage steps towards this distant goal.

“My dream is to implement my research outcomes and future ideas into a startup company and real-life products that could serve society on a large-scale on a day-to-day basis,” Yaari said. 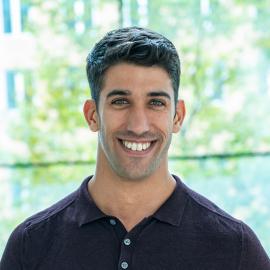